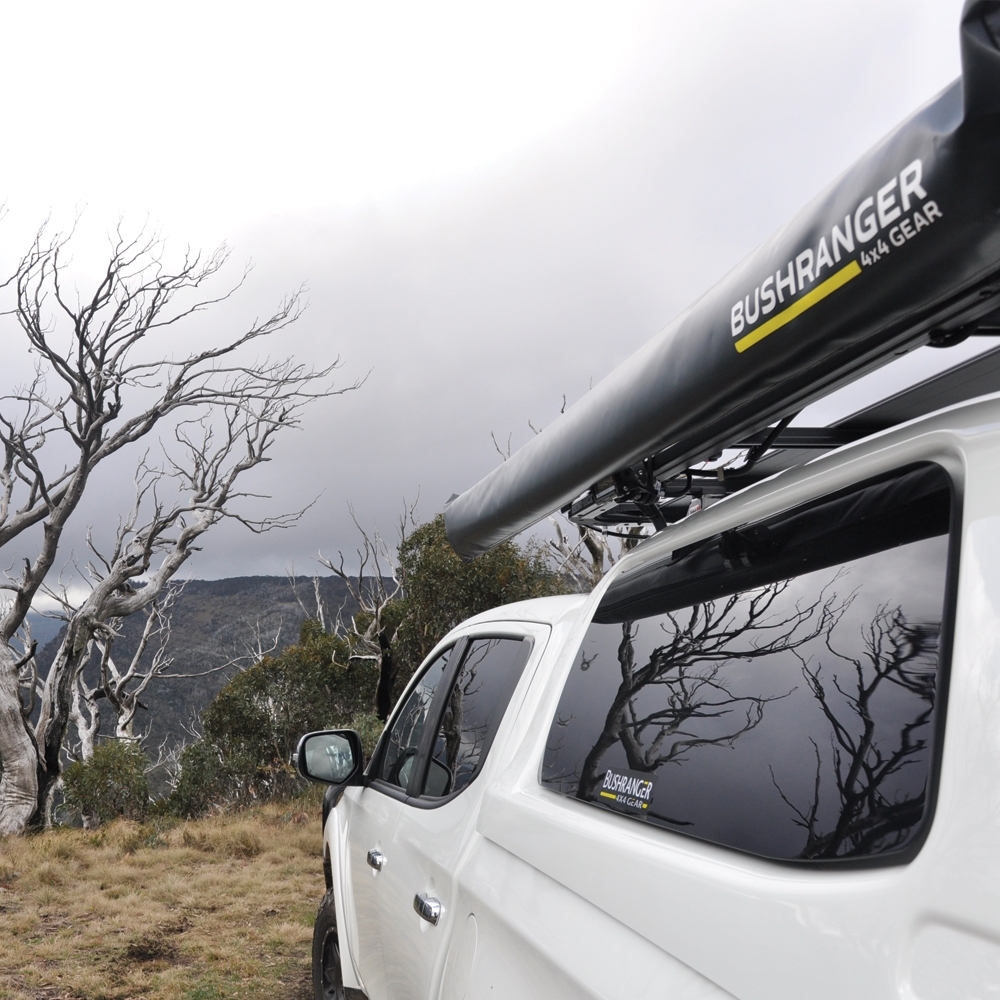 Ever wonder what it must be like working for a 4×4 company?

Let’s get out on the road with, Julian from our Victorian sales team. On a weekend trip with his son into the Victorian High Country in his new Mitsubishi MQ Triton kitted out with everything Bushranger could throw at it.

As with any 4wd trip planning is paramount. Time, location and distance all come into play, where to camp, have you brought enough alcohol, you know the essentials. This trip was to take me into the Alpine NP entering via Mansfield, a hut crawl and exiting via Licola.
However, like all well-considered trips, things don’t always go to plan, especially in the High Country.

I’m lucky enough to live in Victoria, we don’t have the big deserts or island destinations but one thing we have plenty of is the High Country. Located in the northeast of the state it’s only a few hours before you are airing down and visiting God’s country. My trip started off in Mansfield, and as I was there early the Information centre was still closed. So I visited Daz at High Country 4×4, what this man doesn’t know about this region isn’t worth knowing. I hit him up with as many questions as I could; what the conditions like, if there were any track closures and most importantly what the forecast weather conditions. He informed me that a change was coming overnight but it should be fine, so with a renewed vigor I set off and in a matter of kilometers you are off the bitumen and onto the open dirt road, every four-wheeled driver’s dream.

The Howqua track leads you into Sheepyard Flats and just as you turn in there are a couple of spots to allow you to pull over and air the tyres down. Luckily the Bushranger Max Air III has a digital tyre gauge with a built in tyre deflator so the process is as simple as pressing a button. I deflated the tyres down to 28psi with the intention of reducing them if required. This is a trip I’ve done many times before and as soon as you start heading towards those hills, a real sense of joy overcomes you, there simply is no better place I’d rather be. I was lucky enough to have my youngest son as the navigator with me and we soon got talking about having a look at our favourite spots.

The first spot was Fry’s Hut. Positioned next to the Howqua River on a large flat near Sheepyard Flats, this is a great spot to come and camp, fish, bushwalk or takes a horse ride. Built in the late 1800’s by Jim Fry and owned subsequently thereafter Jim’s death by his nephew Fred, it stayed in the family until 1971 when Fred passed away. It is now looked after by a number of groups and is a testament to the build quality of that era.

After a bit of a look around it was back into the car to a favourite of mine, Tunnel Bend. It is a steep traverse down some steps built into the rockface to the river level. This was originally built in 1884 and is a 100-metre long tunnel, through the rocks as part of the 4 km headrace from the Howqua River to a 63-foot waterwheel at the Howqua United gold treatment works at Sheepyard Flat. Take your headtorch though as it is completely dark, and also set yourself up to get wet feet. Another word of warning this is the High Country and I have seen Tiger snakes at the entrance but as long as you are aware it is a great spot to explore with the family. During hotter months there is a deep pool in the river perfect to have a dip but with today’s temperature lucky to break double digits we headed off to our next stop.

We headed east on the Bluff Link road further into the Alpine NP past Refrigerator Gap and as it was nearing lunch time we discussed where to have lunch, we landed at Pikes Flat. This is at the bottom of 16 Mile Jeep Track. The Howqua is only shallow here and great if you have small kids. About 200 metres downstream is a little pool area and small waterfall and for those more adventurous on the other side of the river is Corn Hill Logging Road, impassable to most 4wd’s. Having a look at the sky’s told us that the bad weather might be here sooner rather than later, so rather than continue on to Bindaree Hut and Bindaree Falls we decided to backtrack and take Bluff Track to Bluff Hut.
Surrounded by Snow gums, the views from Bluff Hut are spectacular but with the weather closing in, and visibility was poor. Usually, you can look across and see the ski runs of Mt Buller and across to Mt Stirling. With the fire roaring inside Bluff Hut, it was hard to extract my son from inside. Built in the 1950’s and burnt down in 2007 in the fires that ravaged many parts of the Alpine NP it has since been rebuilt bigger and better, luckily for us as we were about to find out. You can take a trek up to the peak of the bluff from Bluff Hut to some of the best views I know stretching across all the way back to Mansfield and Lake Eildon and just rows and rows of peaks north of Licola.

Next stop – Lovicks Hut. The track is quite rough in parts, and wheel placement can be tricky. The clouds were blocking out the usual fantastic views you would normally see, it takes about 20-25 minutes to get there from Bluff Hut. Lovicks Hut was built by the Lovicks family who in these parts are idolised. The family has used this region for generations to run cattle during the summer months. In fact, Jack Lovick Jnr was named a state living treasure and was involved heavily in the production of The Man from Snowy River which was filmed in these parts (Craig’s Hut was actually made just for the movie). With a concrete floor and a huge fireplace, Lovicks Hut is often used by bushwalkers and 4Wders alike when the weather is not kind, and with today turning that way it had already been claimed. With the plan to stop at Howitt Hut, and with the weather and light against us it was decided to backtrack back to Bluff Hut and see if we can stay there the night.

As we arrived back the visibility was getting very poor and it was only 2:00 pm. Another Dad, Greg with his 3 sons was also contemplating what to do, and after a chat, it was decided we would share the hut. Out came the chainsaws and log splitters as we prepared to hunker down for the night. With enough firewood to keep a crematorium going for a week, we were set for what was about to come.
As it turned dark, dinner was prepared and that is when the storm arrived. With huge gusts of wind and rain coming in sideways we were thankful we had made the earlier decision to stay in the hut. The noise was incredible, so to pass the time the cards came out to entertain the kids (and the big kids) and before you know it one after the other was calling it a night.

Bluffs Track Sunday am, time to bug out.

In the morning it was so cold and outside sleet was falling. Amazingly only a couple of times did it turn into snow, so with all of the best intentions to travel on to Licola, as a solo traveler and in these conditions, it was decided to head back the way we came. The High Country can throw these moments at you occasionally and it’s why I continually come back. I have done this trip dozens of times and every one of them is different.

Thank you, Julian, for sharing your adventures with us, can’t wait for the next one.

Be a Bushranger, join the conversation at facebook.com/bushranger4x4.